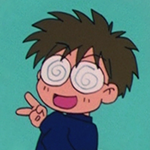 By Badman, September 26, 2014 in Recommendations & Reviews