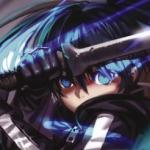 By circusflames, February 19, 2012 in Art and Literature