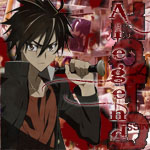 What makes anime special to you and your favorite genre?