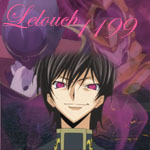 Opinions on Darker Than Black: Gemini of the Meteor